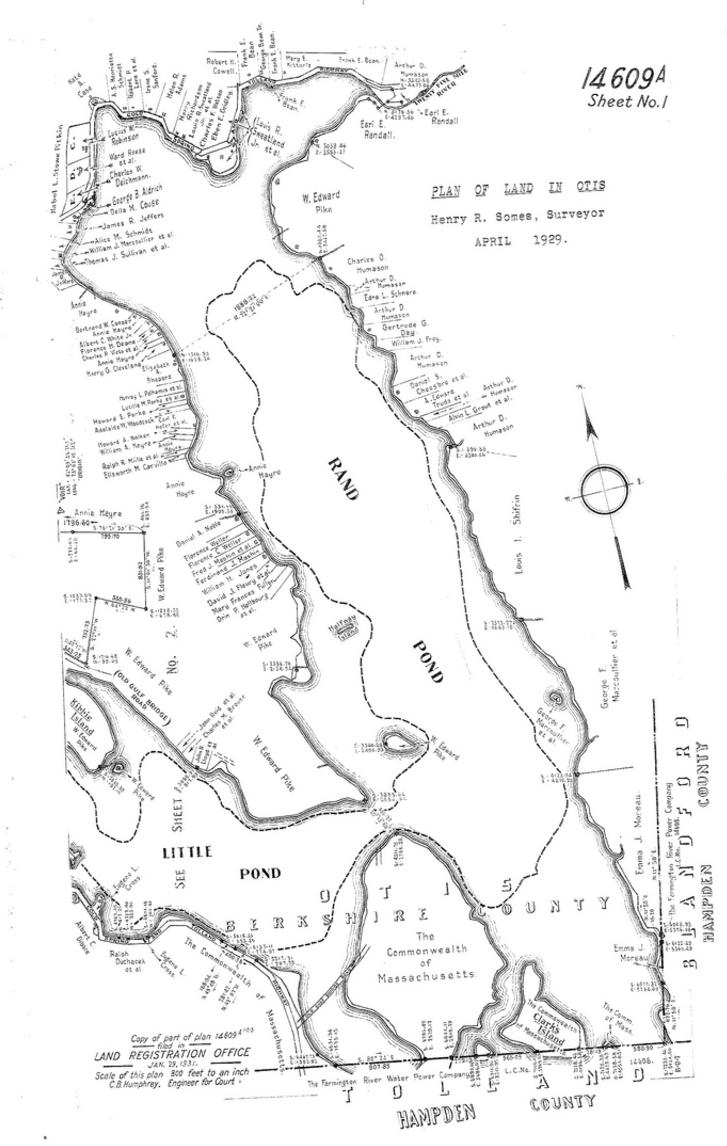 THE HISTORY OF OTIS RESERVOIR


Back in about 1826, Samuel Watkins Collins built a mill on the east bank of the Farmington River in what was then Canton, Connecticut. There were many mills established in that time frame, all dependent upon water power. Sam Collins began small - milling grain and sawing wood - but then he began building machines that would be used to make tools. The tool market was good, as all farm people needed help in tilling the land and harvesting their crops. Tools were essential for living and he found that he could make good money supplying tools for the locals in Connecticut.

He grew his business, added more craftspeople, and built bigger facilities so that he eventually employed just about everyone who lived in that section of Canton, CT. The townsfolk began telling everyone that they lived and worked in the Collinsville section of Canton, and that they worked for Sam Collins down by the Farmington River.

Sam Collins innovated by making a superior quality ax using wrought iron for the head of the ax with an insert of high strength, hardened tool steel sandwiched into the blade for a cutting edge.. The tool steel could be honed super sharp while the wrought iron provided the mass for easy chopping. That was the beginning of a whole new product line of edged tools, and that led to his making all kinds of edged tools and weapons - swords, bayonets, machetes, etc.

The Collins Company was now famous for production of high items. A huge market was found in the south and in South America for machetes used in harvesting bananas, sugar cane and other crops. Then too, the military depended upon the Collins Company to provide swords, bayonet, knives, axes, etc. And so it was that the Collins Company acquired contracts from the Ordinance Department of the U.S. Government to supply the military with those weapons for the Civil War (1861 - 1865). They were highly sought after weapons, their major competitor being the Ames Sword Co. in Chicopee, MA.

While it was very nice to have all that business from the Ordinance Department, it was a difficult time to be in business. Young men were volunteering for the war effort and the Collins Company had trouble getting enough hands to man the machines to produce the goods required by contract. And, the Collins Company was at the mercy of the Farmington River to provide enough water during the summer droughts to turn the machines. There were times when the company had to shut down operations because the water supply was too little to keep the plant going. Employees had to be furloughed until the water returned. But, the Collins Company continued to produce during the “good months” to make up for losses incurred during the “lean months”.

After the Civil War ended in April of 1865, the Collins Company decided to never again be in that predicament of loosing water power. So, they sent three men, Albert Hull, William Canfield and Jared Foster, into the Berkshire Hills to search for the head waters of the West Branch of the Farmington River and to see if there was anyway to create a large reservoir of water that could be tapped when needed to alleviate the drought conditions encountered during the Civil War. The three men found that there was, at an elevation of 1,439 feet, three ponds that fed a river that emptied into the Farmington River. Those three ponds were Messenger Pond, Rand Pond (also known as Cotton Pond) and Little Pond; and the river exodus was a drop of 262 feet down the Fall River to the Farmington. It is not known if the two larger ponds were connected by surface water, but there was a road from Kibbe Point to the Tolland State Park property. Water flowed under a bridge from Rand Pond to Little Pond. The three men commissioned a survey done by a Mr. Chamberlin to determine the various elevations of the ponds, and then they commenced to contact the owners of the land around the three ponds to make offers to purchase their properties (farms). This was in 1865, and the farmers made deals with the three Collins Company men for the sale of their lands around the existing three ponds, with the stipulation that they would retain the rights to 1) access the ponds, 2) water their livestock in the ponds, and 3) retain the right to build piers and structures by the ponds. With these rights built into the deeds to the properties, the land around the ponds was sold to a company formed by the Collins Company in 1867 called the Farmington River Water Power Company. It was formed to build and control a dam across the Fall River so as to produce a large 1,050 acre lake behind the dam, 26 feet above the level of the original ponds, and to control the water flow down the Fall River and thence to the West Branch of the Farmington River that would provide water power to the Collins Company in Collinsville, Connecticut. It is believed that the dam was completed in 1867. The Gate House and the Gate Keeper’s house both date to that year. Total capacity is estimated to be almost 6.25 billion gallons.

These three men also purchased the rights to Great Pond, a 350 acre lake flowing into Otis Reservoir. The original deed to the Farmington River Water Power Company is for 20 separate parcels of land. Between 1887 and 1910 there were 36 more separate land transactions completed.

So it was, that the Farmington River Water Power Company came into its own, controlling Otis Reservoir and the Farmington River. When more water was required by the Collins Company in Collinsville, CT, they would telegraph the gate keeper in East Otis, who would take his horse to the gate house, harness the animal to a lever on the gear driven hoist to raise the gates and release the water. The horse was replaced by a gasoline powered motor and then by an electric motor when rural electrification came to East Otis in the early 1900’s.

The dam was found to be in jeopardy in 1888, so it was refaced with large granite blocks. The Farmington River Power Company relinquished control of Otis Reservoir on October 28, 1966.